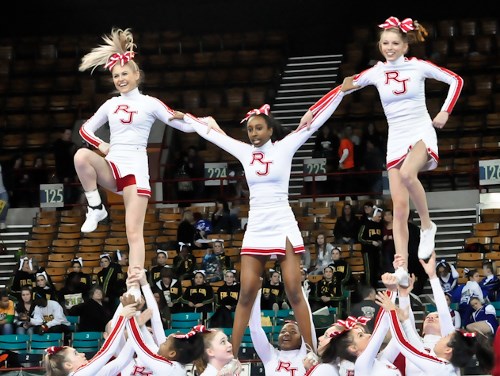 Rules related to minimizing risk of injury to dance and cheer team members are among 29 rules revisions for the 2019-20 high school spirit season.

The rules changes were recommended by the National Federation of State High School Associations (NFHS) Spirit Rules Committee at its March 2-4 meeting and subsequently approved by the NFHS Board of Directors.

“We’re trying to create a safer environment for activities to occur in cheer and dance and make the rules book as clear as possible,” said James Weaver, director of performing arts and liaison to the NFHS Spirit Rules Committee.

Rule 3-3-3 was changed to make it consistent with other braced inversion rules. It now allows for the inverted person to be caught by new catchers as long as the new catchers remain close to the original bases, are in place before initiation of the inversion, and do not pose increased safety risk to the top person.

Rule 3-3-5 was changed to allow a braced front flip to be performed just as it is on the ground while using one bracer behind the top person holding both hands. Both of the top person’s hands/arms must be in continuous contact with a bracer and the bracer must be in a multi-base prep with a spotter. The top person must be to the side or in front of the bracer, and only one bracer is necessary. This allows similar visuals for smaller teams and removes the need for an additional bracer to hold the wrist of the top person.

Another change related to inversions was made to Rule 3-3-6, which now restricts releasing from an inversion with a stunt that has twists at any level, even in the presence of a spotter. Previously, inversions could release with a stunt at prep level or below.

“This change affects how someone moves from upside down. This change is significant because of risks [associated with twists],” Weaver said.

Rule 2-1-5 now states that props made of hard material or sharp edges cannot be released by a top person and must be placed by someone on the ground. This reduces risk of injury from falling props.

A complete list of spirit rules changes is located on the spirit page of the NFHS website, www.nfhs.org, under “Activities and Sports.”

According to the 2017-18 NFHS High School Athletics Participation Survey, competitive spirit is the ninth-most popular sport for girls with 162,669 participants in 6,877 schools around the country.