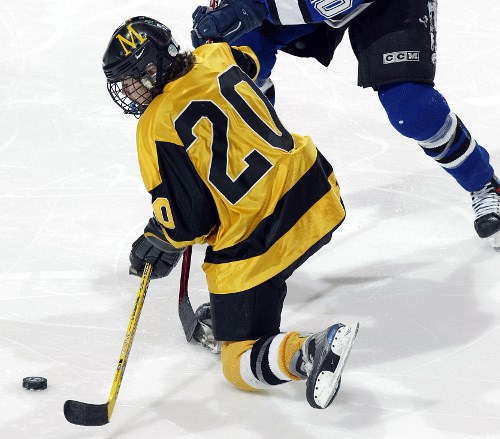 In support of ongoing efforts to minimize risk in high school ice hockey, new rules changes aim to improve how officials call and manage the game.

Five rules changes were recommended by the National Federation of State High School Associations (NFHS) Ice Hockey Rules Committee at its April 24-25 meeting in Indianapolis. All 2017-18 ice hockey rules changes were subsequently approved by the NFHS Board of Directors.

Rules 2-2-6 and 4-2-8 now state that when rules indicate a “captain’s choice of players” for serving a penalty, the captain must select a player who was on the ice when play was stopped, excluding the goalkeeper. The committee determined that it is difficult for officials to monitor the specific players on the ice during a delayed penalty call, as line changes frequently occur. This change should make it easier for officials to identify a player on the ice rather than recall who was on the ice at the moment the infraction occurred.

“Over the past several years, the Ice Hockey Rules Committee has tackled the dangerous plays in the game – contact to the head, checking from behind and boarding – and two years ago it reformatted the rules book to allow flexibility for officials to call what they see,” said Bob Hayden, chair of the NFHS Ice Hockey Rules Committee. “Those two initiatives have proven very beneficial to high school hockey.”

A change in Rule 2-2-5 now states that the head coach must meet with the referee(s) prior to the start of the game. By clarifying this procedure, it ensures verification from the head coach that all participants are properly equipped.

Official language was added to Rule 9-1-2 stating that the official who drops the puck during a faceoff shall set the players by blowing the whistle.

“This is a standard in hockey and already in practice in the sport; however, the NFHS rules had no specific language to cover this duty during the faceoff procedure,” said Dan Schuster, NFHS director of educational services and liaison to the Ice Hockey Rules Committee.

Rule 6-1-9 is a new rule that states, “no player, coach or team personnel shall spit at an opponent, teammate or game official.” To emphasize the severity of the action, the resulting penalty is game disqualification for the offending player.

Finally, Rule 1-3-5 now requires water bottles used by goalkeepers to be secured to the top or back of the goal frame. By making this a requirement, it ensures water bottles will not fall onto the ice and interfere with the flow of the game.

According to the 2015-16 NFHS High School Athletics Participation Survey, there are 35,155 boys participating in ice hockey in 1,607 schools across the country, and 9,514 girls playing the sport in 642 schools.

Bryce Woodall is an intern in the publications/communications department at NFHS. He is a senior at Franklin (Indiana) College studying public relations.