The National Federation of State High School Associations recently tabulated debate ballots from 34 states, Washington D.C., the National Speech and Debate Association, the National Debate Coaches Association, the National Association for Urban Debate Leagues, and the National Catholic Forensic League. The returned ballots narrowed the five proposed topics to two for placement on the final ballot to select the 2022-2023 national high school debate topic. The five topic areas were ranked 1-5 with the two topic areas receiving the lowest totals – Climate Change and Emerging Technologies – placed on the final ballot. On January 10, 2022, the NFHS will announce the preferred topic area and resolution after states and national organizations are able to place a final vote. The 2022-2023 national high school debate topic and resolution will be posted on the NFHS Speech and Debate webpage and sent to state associations and affiliate members.

In addition to the 35 State Associations, the NDCA, NSDA, NAUDL, and NCFL returned the ballot.

The following chart summarizes the balloting on the topic areas and their respective resolutions. Areas ranked 1-2-3-4-5 with low combined total indicative of top ranking. 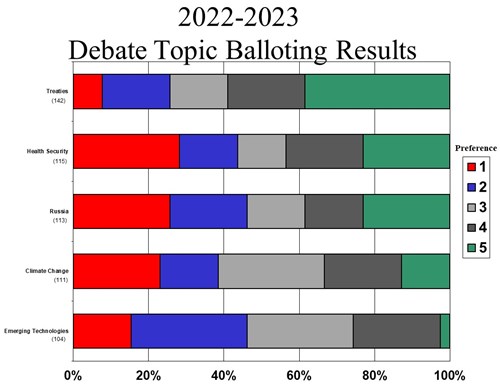 See how we got to 5 topics

Dr. James Weaver is the Director of Performing Arts and Sports at the NFHS.