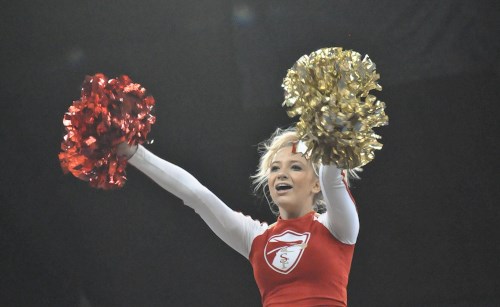 High school spirit rules changes for the 2020-21 school year remain centered on increasing safety for cheerleading and dance teams across the country.

“The committee has been working for years to make spirit activities safer for our student participants, while maintaining a high level of competition and crowd leading,” said James Weaver, NFHS director of performing arts and sports. “This will continue to be a primary focus of the Spirit Rules Committee.”

Stunting personnel safety was addressed in Rule 3-2-1c, a new addition to the NFHS Spirit Rules Book. The rule states that bases may not hold signs or other objects while supporting an extended stunt, which allows them to focus on providing stability for those at the top of the stunt.

Under Rule 3-3-6c2/4-3-6c2, a spotter has been added as a point of sufficient contact for a top person who is inverted, and the required contact with the top person has been changed to any part of the body. Prior to this change, only a base and the top person’s upper body were listed as viable contact points.

Three more inversion-related changes were made to Rules 3-3-5a, 3-3-5g and 3-3-5h, which deal with acceptable conditions for braced flips within a pyramid. The change to 3-3-5a mandates that in situations where a single bracer is used for a braced flip, there must now be a hand/arm connection between both hands/arms of the top and bracer. A top person may now perform up to one complete twist within a braced flip as described in 3-3-5g, which is an increase from a half-twist in the previous version of the rule. Finally, in order to limit the movement of the top person around the bracers while performing a flipping inversion in a pyramid, 3-3-5h was edited such that a released top person may make no more than a one-quarter turn around the bracer.

A change to Rule 3-3-6a added further specifications to other inversions. Top people performing released inversions must now be released to the original base(s) and are now permitted to twist a maximum of one-quarter turn.

A new rule regarding tumbling was added for both cheer and dance. When executing airborne skills, actions that require hip-over-head rotation may no longer be connected to one another. The basis for this rule is to eliminate standing tucks where athletes connect arms and simultaneously do a standing tuck, which puts the connected participant at serious risk for a head/neck injury.

Regarding drops in cheer and dance, participants are now permitted to land in a pushup position from a handspring; however, doing so from a flip is still prohibited. This alteration clarifies that a drop is a landing on the performing surface from an airborne position.

There were two rules changes to Rule 3-5-5. When releasing from a horizontal or cradle position, the top person is now permitted to go to a stunt at any level to the original bases and may perform up to one-quarter twist. The change aligns this rule with its inversion equivalent. In addition, when a braced released top person lands in a cradle position, the connection between the top and bracer may be hand to foot.

A complete listing of the spirit rules changes, including edited term definitions, will be available on the NFHS website at www.nfhs.org. Click on “Activities & Sports” at the top of the home page and select “Spirit.”

Competitive spirit ranks ninth in participants for girls with 161,358 in 7,214 schools.