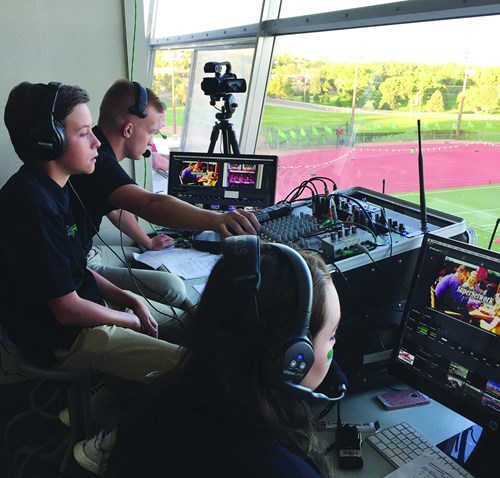 During the past two years, the students of Farmington (New Mexico) High School’s Student Broadcast Program have been recognized by the New Mexico Broadcasters Association with six awards for their student broadcast and production excellence.

The awards are quite the feat for a school that just five years ago had a Media Arts Department with nothing more than a couple of related courses. With the help of a single iPad and a student, the program quickly grew to a 35-student operation with an Internet radio station, recording studio, and the ability to live stream school and community events.

Erin McGinley, who heads Farmington’s Media Arts Department, discovered The Cube streaming device for the program five years ago. The Cube was purchased by PlayOn! Sports in April 2018 to pave the way for the NFHS Network to become the largest single destination for fans to watch live high school sports broadcasts.

McGinley’s discovery of The Cube fell into the hands of John Curry, a fellow coach and media arts teacher, whose previous work as a radio station general manager had him familiar with the “ins and outs of audio production.”

“When it first started, The Cube offered a program for high schools in which they received an iPad and the ability to live stream events. Erin came across that, signed us up, and gave it to me with the instructions and told me to see what I could do with it,” Curry said.

Curry got acquainted with the new tech by placing it on a tripod during a Farmington athletic event. By the next game, he was joined by a student to create a two-man broadcast team. Yet another student joined after seeing the two at the second game and jumped aboard the growing team.

“After the second game, I figured out how to attach a mixer to the iPad and gave the student a format with what to do and not do,” Curry said. “It just went on from there one student after another.”

“The FHS Live Streaming Broadcasts are broadcasts patterned after an ESPN-like format where students perform in the capacities of one of five camera operators, a color commentator, play-by-play announcer, on-field reporter and sound technician, all of whom take cues from a director,” Curry said.

Curry added that students also handle all pre- and post-production duties, in addition to the interviews and graphics seen during a broadcast. FHS Live’s vast resume extends to school plays, graduations, community meetings and events at other schools. Broadcasts can be viewed on the NFHS Network and on FHSLive. com.

When school administrators began noticing the growth of Curry’s program, he approached them with a plan to offer mass media classes for which he wrote the curriculum. Since the program is a part of Science, Technology, Engineering and Mathematics (STEM) curriculum, it annually qualifies for a grant through The Federal Carl D. Perkins Career and Technical Education Improvement Act.

As with the growth of any program, there have been challenges. Among them is the search for another teacher. In the interim, Curry’s advanced students have stepped up to the plate to lend a hand in teaching assistant roles. Efforts like these do not go unnoticed to Curry, who sees their abilities continue to increase and their contributions rival his daily. 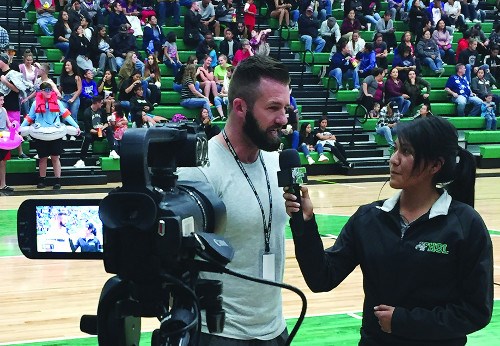 “I liken it to any sports team on campus; some of these students have 14-hour days,” Curry said. “They’ll come do the morning show at 7 a.m. and then we’ll go do an event after school which has them getting home around 10 p.m. Then we do it all over again the next day. It’s a challenge for the students, but in my mind, it’s helping prepare them for their working adult life.”