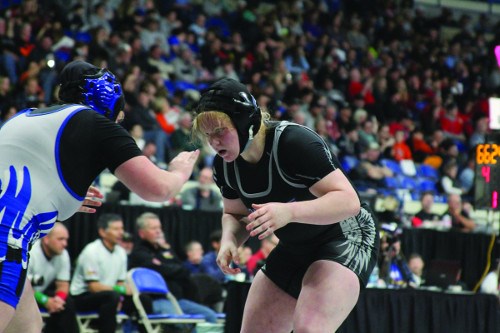 At least 15 states have separate state wrestling tournaments for girls, including Alaska, Arizona, California, Colorado, Georgia, Hawaii, Massachusetts, Maryland, Missouri, North Carolina, New Jersey, Oregon, Tennessee, Texas and Washington. Nebraska is planning to add a championship for the 2019-20 school year. Other states are considering the idea, and in many states, girls wrestle on teams with boys.

Nebraska is one of the states exploring a pilot program. The Nebraska School Activities Association (NSAA) will vote on sanctioning girls wrestling in April after the proposal was passed by four of the six state districts during meetings in January, according to NSAA Executive Director Jay Bellar in a Lincoln Journal Star article in late January.

There are still details to complete, such as brackets and season structure; however, the move to separate girls wrestling is widely supported. In an NSAA survey of 139 wrestling coaches, 118 favored adding a separate girls division and state championship.

Colorado is involved with girls wrestling as a pilot program as well. This season was the first year of a two-year period needed to sanction girls wrestling by the Colorado High School Activities Association (CHSAA), and it is the third year the CHSAA has offered girls-only events and tournaments. After the pilot seasons, girls wrestling tournaments in Colorado will be considered varsity events.

The struggle for Vosburg and other proponents of girls wrestling in Maryland is to retain the female wrestlers they have and continue adding to the program. Vosburg said they mostly use word of mouth to grow the sport.

Maryland high school coaches also try to get college coaches involved as an incentive to female wrestlers. They work to dispel negative, stereotypical images about wrestling and cutting weight by promoting healthy eating, weightlifting and being an overall healthy athlete.

Vosburg said wrestling teaches mental toughness, overcoming challenges and facing adversity. He explained that wrestling teaches girls to believe in themselves because they must have self-confidence on the mat. He believes establishing girls wrestling programs is valuable by providing girls a separate space from boys to show their skills.

“A lot of girls who started out wrestling stick it out because it gives them a chance to shine at the end of the season,” Vosburg said.

The North Carolina High School Athletic Association (NCHSAA) sanctioned a girls wrestling invitational for the first time this February. Since there are no sanctioned girls wrestling teams in the state, the NCHSAA allowed girls to wrestle individually and did not give team awards. There were 11 weight classes, and the top four wrestlers in each weight class were awarded medals.

The New Jersey State Interscholastic Athletic Association (NJSIAA) is also taking steps to recognize girls wrestling. The NJSIAA sanctioned girls wrestling as a recognized sport this year, and it created a division within the boys championship to award individual girls state wrestling champions.

NJSIAA Assistant Director Bill Bruno said the association tried to parallel the boys championship this year by hosting regional tournaments, then seeding girls to the state championship in Atlantic City. Of the 300 girls seeded at regionals, 60 girls advanced to the championship.

“It’s been an awesome experience,” Bruno said. “The building that hosted the regional tournament was full of excitement and energy. It just was a win-win situation for everybody.”

Bruno said about 120 girls wrestled last year, but after the NJSIAA sanctioned the sport, about 430 girls participated this year. Bruno said he would like to see the girls wrestling program match the boys program in the next five years.

“I think if we continue to grow and see the spike in numbers, the sky’s the limit for the girls,” Bruno said.

Missouri is another state with rapid growth of girls wrestling programs. The St. Louis Post-Dispatch reported in November that the Missouri State High School Activities Association expected about 250 girls to sign up for its first girls state championship last month. Instead, it received nearly 825 entries.

Other states, like Iowa and Maine, have unofficial girls wrestling tournaments that are not recognized by the state associations. According to the Daytona Beach News-Journal, the number of female high school wrestlers in Florida grew from 97 in 2010 to 358 in 2017. Girls have the option to enter the Girls State Wrestling Championship in Florida every February, but it is hosted by the winning school from the year before and not recognized by the state association.

Robbie Lindeman, director of athletics at the Florida High School Athletic Association (FHSAA), said the FHSAA has noticed the increase in girls wrestling. He said there were 622 high school girl wrestlers competing throughout the state this year, and the addition of a separate girls wrestling program has been a topic of discussion for the wrestling advising committee the past few years.

Lindeman said the biggest hurdle to sanctioning girls wrestling in Florida is a rule that requires a minimum of 10 percent of high schools in at least two of Florida’s four administrative sections to sponsor a program in the sport for at least two years. After two years, the schools can officially request the FHSAA to recognize the sport.

“It is a constant discussion, and it’s evolving,” Lindeman said. “We’ll continue to look at where we are with those high schools.”

Oregon was one of the earliest states to address the demand for girls wrestling programs. Brad Garrett, assistant executive director of the Oregon School Activities Association (OSAA), said his state has been nurturing the growth of girls wrestling since 2005.

The OSAA began by adding unofficial exhibition matches specifically for girls at its state championships. Two years ago, Oregon went from about 80 female high school wrestlers to 200. This year, the number is about 620. This was the first year the OSAA offered a girls division at the state championship.

“These young ladies are athletic and committed,” Garrett said. “I saw a bunch of smiling going on at these regional qualifying tournaments.”

Garrett said developing girls wrestling programs has had its share of growing pains, but he said the challenges are worth it to give girls the chance to wrestle. One concern is the distribution of girls across different weight classes. This year he was relieved to find that the weight classes were evenly balanced.

The biggest struggle the OSAA faces is predicting participation. Someone who starts the season may not finish it, and one concern is that in the future the number of girls in high school wrestling will start to decline. Garrett said so far that has not been a problem. He said the coaches want more qualifiers for the state tournament, and the OSAA would like to be able to accommodate those requests.

“[The girls] have done an outstanding job of really validating the fact that there’s a place in this sport for young ladies to participate,” Garrett said. “I think any time we can build participation opportunities at the state level, it’s a real positive thing.”

Kirsten Adair is an intern in the NFHS publications/communications department. She is a senior at Butler University in Indianapolis majoring in journalism.