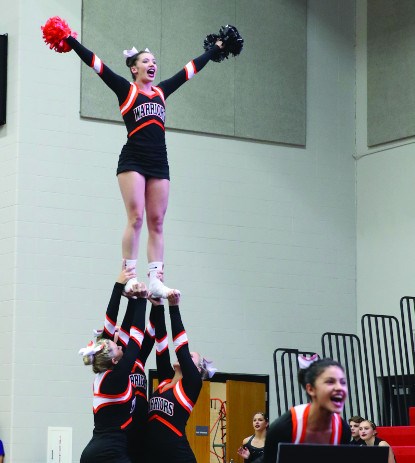 Bethany Hamilton, a famous surfer and shark attack survivor, once said, “Courage, sacrifice, determination, commitment, toughness, heart, talent, guts – that’s what little girls are made of; the heck with sugar and spice.”

At the inception of cheerleading in the late 1800s, the organized activity was for males only. Females were not allowed to participate in college cheer until 1923, and the activity didn’t become predominantly female until the 1940s, when boys departing for World War II left an opportunity for females to join in large numbers.

Since that time, cheer has spread with wild popularity from college to high school, to youth cheer, and finally professional and all-star cheerleading. Most would agree that “sugar and spice” have been predominant characteristics of traditional cheerleading, with big bows, glitter and rhinestones, and skirts and makeup being staples in a cheerleader’s uniform repertoire.

This debate was finally settled for California schools with the signing of Assembly Bill 949, which was introduced by Assembly Member Lorena Gonzalez on October 7, 2015. This legislation made competitive cheerleading in California a sport beginning with the 2017-18 school year.

In Oakley, California, located in The East Bay of San Francisco, the cheer community couldn’t have been more excited as the area has deep roots in competitive cheerleading with many championship teams at both the youth and high school levels. Even though the new status as a sport would come with new rules and new challenges, we were ready.

With competitive cheerleading at Freedom High School in place for 12 years, originally our main focus was how becoming a California Interscholastic Federation (CIF) sport would impact our competition season. The many positive changes that have occurred from the implementation of STUNT have impacted our school’s culture as well as our cheer culture as it brings focus and validation to our cheerleading athletes.

Due to the overlap of the traditional Competitive Cheer season and the Competitive Sport Cheer (STUNT) season, in the Spring of 2018 we started our inaugural STUNT season six weeks after the season’s official start date. While it was the first year STUNT was a state sport, there were many teams in our section and neighboring sections that had been involved with STUNT unofficially for five years.

STUNT, one of the fastest-growing female sports in the country, was created by USA Cheer. STUNT focuses on the technical and athletic components of cheer, including partner stunts, pyramids, basket tosses, group jumps and tumbling. These elements are put together in short routines that both teams must perform head-tohead on the floor at the same time. The team that executes the skills best wins the round and the point, and that team has the opportunity to determine which of the routine levels will be called next. STUNT has four quarters of play – partner stunts, pyramids and tosses, jumps and tumbling, and team routine.

Having just finished a successful traditional competitive cheer season, our cheerleaders who came out for STUNT already had acquired the skill level needed to perform all routines in partner stunts, tumbling and pyramids.

With little expectations for our first season, the girls became energized by the precision and focus on technique. They liked the ownership they could take over the routines and began to study videos and count sheets at home. They became experts on the routines and coached each other on and off the mat. They began to realize the benefits of rotations on and off the floor and cheered their teammates, coaching them from the bench with counts and reminders.

As league play began, we got our first taste of the intensity involved with STUNT contests. In traditional competitive cheer, teams perform their well-planned 2½-minute routine designed to match the scoresheet in a way that will gain the highest reward, and then teams wait for results and awards. Consequently, the contests varied in subjectivity since results are out of the team’s control – no matter how well it performs.

In STUNT, subjectivity is a non-factor as the team that performs the routine with the most accuracy, least amount of errors and best technique wins the point. If our team didn’t win a round, it was OK because we didn’t have to wait months to perform again. There was another round.

In a traditional Competitive Cheer season, a team might see 12 to 15 minutes of mat time in a year. Now, we were suddenly experiencing over an hour of on-mat playing time several times a week. The girls were doing what they loved for more hours of competition than ever before. There was no doubt that coaches and athletes alike were hooked.

Coaches strategized when and what routines to call, how to gain and keep position, which athletes to play which rounds and against which opponents. We studied and perfected routines as the season went on and gained momentum from each victory. We learned how to use time-outs strategically to help our small team rest at the most critical moments. Our athletes were at their best as the season peaked. The high physical and mental demands of STUNT had pushed them farther then they had ever been pushed before and they were rising to the challenge.

About four weeks into the season and halfway through league play, we started to notice the positive changes in cheer culture at our school. The anecdotes kept coming in from athletes, teachers and parents. A senior team member said, “The football players are asking us when our next game is and if we won last night. They are giving us high fives.” Parents were ecstatic about the game’s fast pace and excited about how much playing time their cheerleaders were getting. They reported being relieved to have games in close proximity and be free of the burden of travel obligations that go along with traditional Competitive Cheer.

One history teacher at our school approached me after a game with her hand on her heart and said, “You have to use more timeouts. My heart can’t take the anxiety and suspense. I need the time-out breaks.” I laughed and promised to try my best.

The announcer for our basketball games agreed to announce our home games, and as the season wore on and he understood the rules, he could be heard on the microphone saying, “They have called routine six! It’s a risky move. Let’s see if they can pull it off.” After some routines, spectators were so quiet you could hear a pin could drop in the gym as the crowd waited with mute anticipation for the judge’s decision. When the referee pointed to the winning side to award the point, the winner’s crowd would erupt in elation. Our community was embracing the new sport with verve and appreciation.

After finishing our league season undefeated, we were awarded the championship pennant and the fifth seed in the section playoffs. Our school community was united in supporting our team. After winning the first two rounds to advance to the final game of the tournament, we were all filled with pride as we looked in the stands to see our student body, teachers, administrators, families and friends all there to support not just us, but the new sport as it changed the lives of everyone. They cheered us on as we brought home the first section championship for Competitive Sport Cheer.

We were even honored at a school board meeting with certificates of appreciation from the California State Senate and Assembly. We were able to change the way our school and community viewed cheerleading. A new sport has been successfully embraced with enthusiasm at our school, and we are excited to see the sport grow throughout the nation.